But really, it doesn't seem like any of my friends post anymore. This is more of a "Where you can find me" update.

I'm on Diaspora as dr_bob_tesla@diasp.org and on Twitch.

Because of how much time we need to dedicate to raising her (we only get 1 chance to not screw this up) and the whole pandemic crap, we had to end Midnight Monster Movies with Dr. Bob. No regrets as this was something we had planned for when we were in the planning stages of growing our family. I will be rebooting the show as a streaming show on Twitch as we go forward.

That's all for now. I need to get to bed!

Since I've been on parental leave this holiday season, I haven't been slaving away in retail this year. As a side-effect, I have Christmas spirit again. I've been singing Christmas songs around Gwynn; telling my wife to put on her Christmas specials... We took Gwynn to see Santa for the first time and I actually found myself tearing up a bit. I know Gwynn is too young to ask for anything but I was mentally asking Santa for a healthy and happy baby for the next year. Our little girl is a beauty.

We also traded in the CARDIS and got our Tesla Model 3 two weeks ago. Holy shit, this is a sweet car! We named it Mjolnir. I'm looking forward to never buying gas again. I'll never have to get an oil change again. This is awesome. 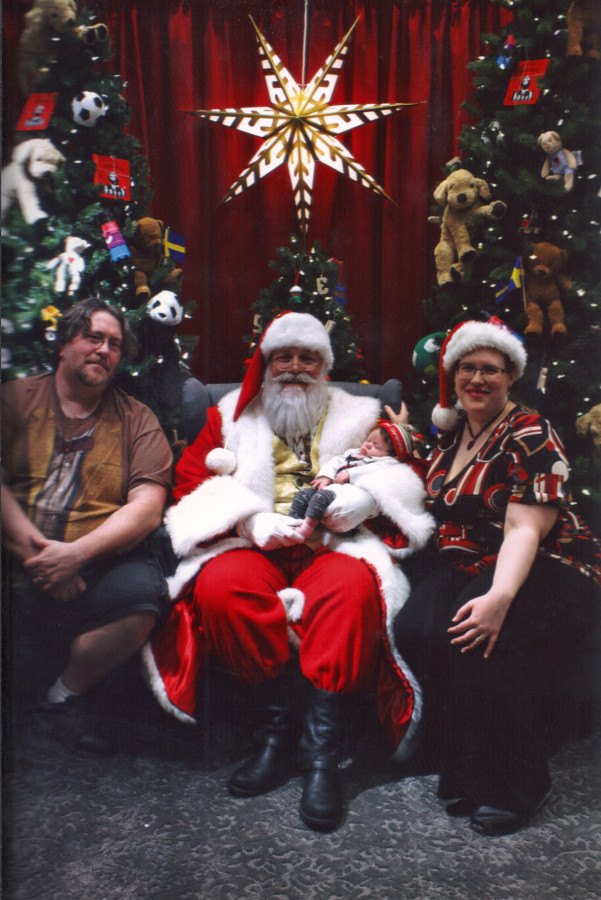 You were a good car for the last 7 years but the future arrives tomorrow. 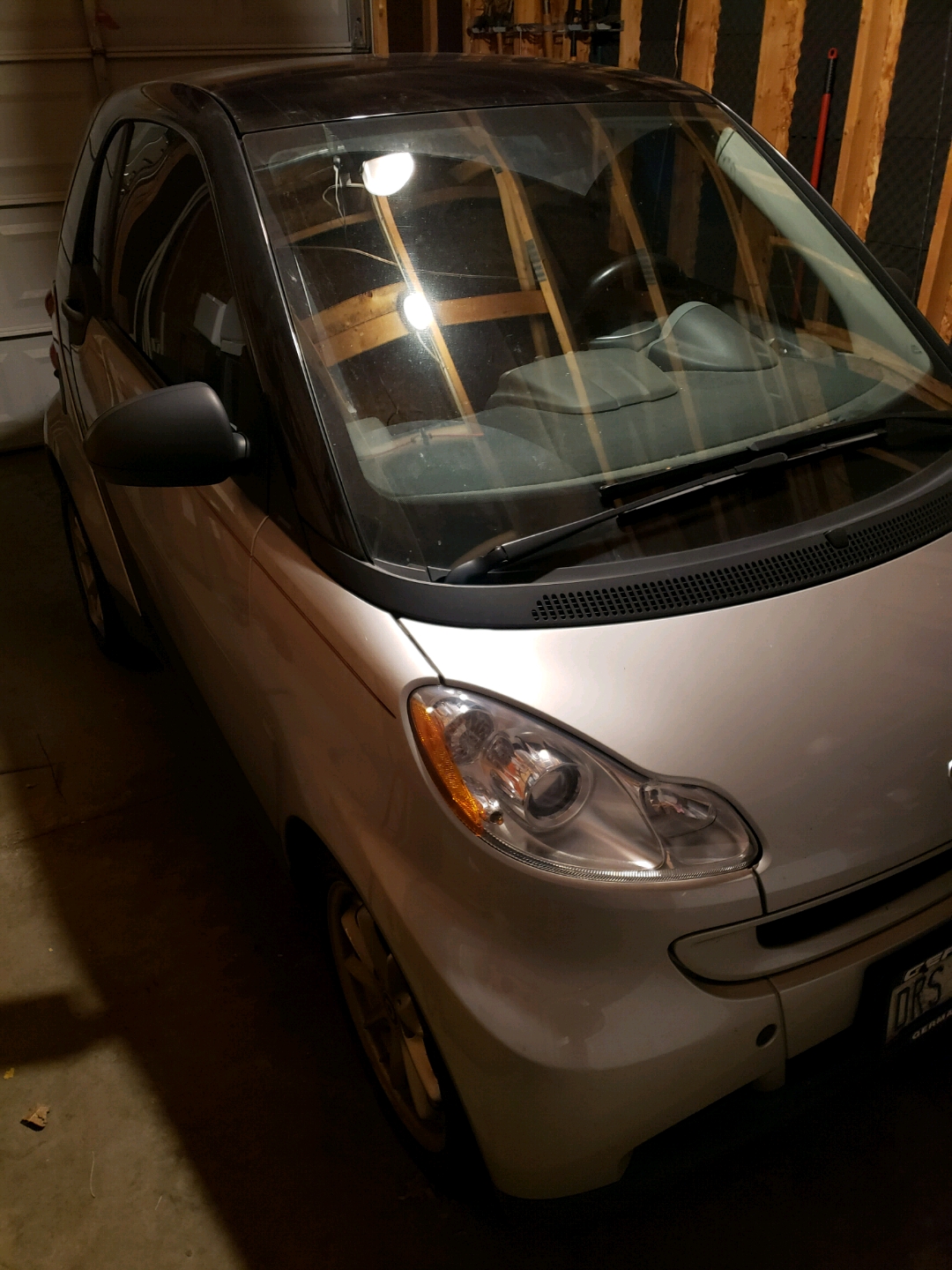 Gwynn is a month old now! And I get my Tesla Model 3 next week. I'm glad I have 3 more weeks of paternity leave. Gwynn's kicking our ass a bit. She's eating constantly when she's not sleeping and she's not sleeping at night. We're working on it. We'll get it figured.

Tesla put out a lower cost version of the Model 3. It wasn't the $35k base model we were waiting on but it was low enough for us to barely swing. Plus we will be able to get the car THIS year! Since Elsa is about to give birth any day now, getting a car that can fit a car seat is a high priority. We should be able to get in December.

We test drove one this week. Holy cow... It's going to take some time for me to retrain myself to a new way of driving. I've driven a gas-powered car since I was 15, three-quarters of my life. It's a lot to unlearn. It's so far advanced.

I consider myself very lucky. I caught myself looking at some old lj entries (boy, it's easy to fall down a well) and feel I have to say how thankful I am. Somehow, through all the flailing about (emotionally and physically), I landed here. I have a happy home. a happy wife and, soon, a baby (who I also hope is happy).

somehow, I landed here and I don't know how.

We just had our baby shower. November 7th is coming up fast. Thursday we're getting a 3D ultrasound done so we can see the face of baby Gwynn.

We also have one month left of shows for the monthly IRL live shows.... at least until spring when we re-join the Dwight Frye Underground Cinema.

I have interesting news..... coming soon.

I'm holding off a couple of weeks but....

So much to say.

We've got a lot going on. But let's get the weirdest bit out of the way. We put the Christmas tree in a new location this year and I needed to move old storage boxes out of the way. While I was doing that, I had to repack some of the boxes because they weren't full. I found a script for The Colour of Magic in one of the boxes... A script for our Discworld acting group ... that I wrote ... that I have NO memory of writing. Neither does Elsa. We don't even know when I would have had the time to write it. The timing seems to be after I had started Midnight Monster Movies but that is even more puzzling since, once we started that, ALL my free time disappeared. To make things even more puzzling, there is no trace of the original file on my computer, any of my backup hard drives or cloud services and I'm a guy who backs up the things I make. Elsa thinks either I wrote it in my sleep or it showed up from another dimension.

In other news, we're buckled in for the next phase of adulting. We're on track for trying for a kid. We're in a good place financially; Elsa got the medical ok; we are on a waiting list for a Tesla (we'll need more room); we're kicking the roommate out so we can turn that room into a kid's room (or a library, if we can't have a kid). We go on a cruise in a week and that's the official kick-off of trying. If we can't conceive in a year, we go to our fall-back which is kick-ass library and enjoying vacations.

We finished up the season 11 of MST3K, the revival season on Netflix. I'm sure most of you long-time readers (all 2 of you who still read lj?) know I am a huge MSTie. This season made me go 'meh' overall.

They did some great things. Felecia Day and Patton Oswalt are awesome additions to the cast, every one of their scenes is great. I love that they finally brought in subtitles for both the movie and the riffers! They had that on the MST3K movie and never again! It helps (especially for people like my wife who are watching it for the movie). The new miniatures and and sets great. I'm so glad they didn't CG everything! They also kept the SciFi-era tradition of 'trying not to talk over the movie' so that was appreciated. They got a ton of guest stars! I remember getting excited on the old series when they got Leonard Maltin for an episode; I would have freaked if they had Neil Patrick Harris on like they did this season.

The new season also failed for me on some parts. First off, I never warmed to Jonah. He had some good stuff, sure, but I didn't like his relationship to the bots and it never felt like he quite gelled with the show. The voices of the 3 riffers were too similar although it did feel like they were starting to find voices by the end. The riffs themselves felt too rushed and almost sped up at points rather than the conversational "watching a movie with your funniest friends" feeling it used to have. One thing I absolutely hated was the fact that the movies were edited for no other reason than run time! The show is on Netflix; you don't have to keep it under a certain time! That really steamed my hams. I also wasn't a fan of the faux commercial bumpers for the same reason.

So, there you have it. A meh. I hope they fix some of this with another season (let's be honest, the first couple of seasons of the original MST3K was rough). Hopefully, they take the opportunity to ditch Jonah (as it seems possible with the ending of the season) and bring in someone less "look at me, look at me!" AND DON'T EDIT THE MOVIE FOR RUNTIME! We're gonna watch it even if it was 2 hours long!